Rules Guiding the Movement of Soldiers 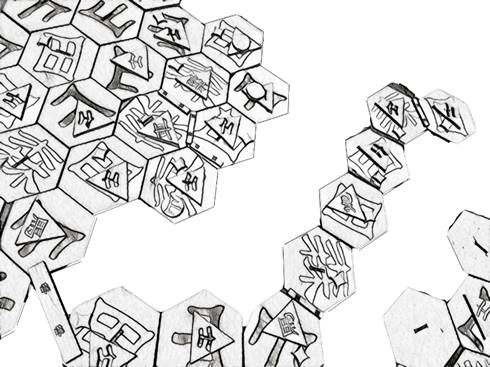 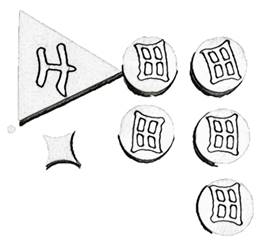 The emperor dispatches you to a province to passives the population and develop the tax system. Each player starts with one villager, one soldier and five food coins. Take turns picking a hex along the board edge to start on.

The game has three phases each turn:

If a hex is occupied by a player’s pieces, the occupying player can extract a resource of the land type from the hex. Pick up one coin with the corresponding symbol on it for each occupied hex.

Mountains: Stone and metal can be harvested on these desolate slopes. These hexes produce mountain coins.

Place canals on the edge of hex, all adjacent hexes produce + 1 of their resource.

Connects one hex distance over water. If built on a hex with the soldier, the soldier must immediately cross the bridge and pick a new facing.

If a villager and a unit are on a hex, the occupying player can extract 1 resource of its type.

The art of war has 8 unit types: soldiers, cavalry, chariots, cannons, strategists, generals and body guards. Each unit type has a different movement, and cost. All units attack by moving onto an enemy unit’s hex, unless otherwise noted.

Movement: When soldiers are created choose their facing. They move straight. They can turn if they hit the edge of the map. If a bridge is built on the hex they are on, they must cross it. Once they cross a bridge, they can choose a new facing. This movement happens immediately, even if another piece already moved this turn. This can be used to make an extra attacking move. 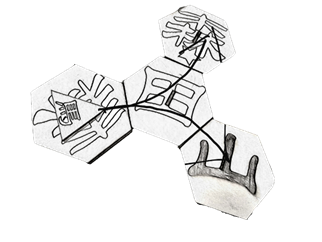 Movement: Horses move one hex forward and one hex diagonal, to the right or left. This move can be used to jump over another piece.

Movement: Can move as long as you want in one direction. If it runs into another pieces, it can stop at it, or attack it.

Movement: Can move as long as you want in one direction. Cannons cannot move and attack in the same turn.

Attack: Catapults lob rocks to clear an advance. They can only fire when they are protected. If one of your pieces is obstructing the line, then the catapult can attack the next piece in a straight line of sight beyond your piece.

Movement: The bodyguards protect the general. They can move between any hex adjacent to the general.

Attack: The strategist is a master of reading the battle and improvising clever plans. The strategist has two special actions it can take before or after moving: burn woods, or break a canal.

The strategist can light a woods hex in an adjacent hex on fire. Place a red fire marker on the hex. Any

Unit tokens on the hex die. Next turn throw Unit token into the air to decide randomly which direction the fire moves. Move the fire to that hex.

If that hex is a woods as well, light it on fire, and remove any unit token. Otherwise, the fire extinguishers.

The strategist sends sappers to destroy the irrigation canal on an adjacent hex. Remove the Canal from the board and place a flood token on the hex at the far end of the canal (Farthest from water source). Remove any army on that square. Next turn throw a unit token into the air to decide randomly which direct the flood moves. Move the flood to that hex. If the hex is mountain or water, remove the flood token. 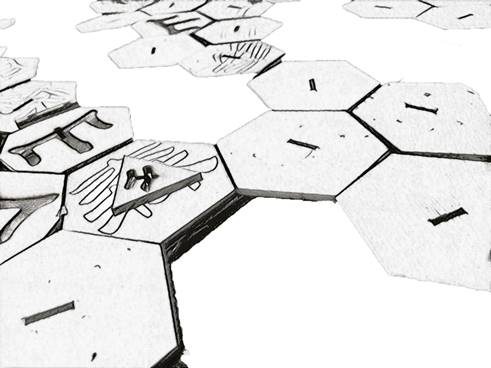